I arrived at yoga class feeling edgy. I’d walked there along the path, which bordered the ocean. The waters were usually calm, but yesterday the waves churned blackened seawater. I’d passed a bulldozer moving sand as it built up a berm on the beach. Clearly there were preparations underway to protect the shoreline. 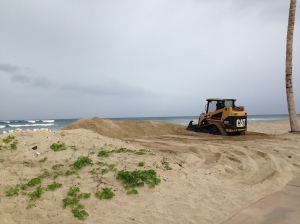 But the approaching storm was only a parallel to my internal turmoil. I’d been talking on my phone as I walked. I should have been a better listener, but instead my own feelings about the situation we were discussing had leaked out. Instead of being a help, I’d piled onto the agitation.

I couldn’t settle to the class. Usually I can attune myself rapidly but not yesterday. I went through the motions but I wasn’t really there. When one of the women pointed out a rainbow on the horizon, I couldn’t even see it. As the minutes passed, I played the conversation over and over in my head, wishing I’d not spoken off the top of my head.

Finally, I began to calm and my senses took over. At about the same time, the rainbow became more visible, and began to spread across the ocean. Usually I get a sensory Ping with these marvels of nature. I searched my mind for a meaning behind the vibrant arc of colors, but I felt nothing. Then I saw a whale breach, its body totally out of the water. 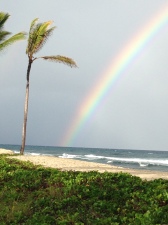 The awesome sight of the huge mammal doing what it’s natural for it to do gave me insight into my own heart. I didn’t have to delve too far into the metaphor file to gain some understanding that I’m but a grain of sand on this planet. My perspective returned as I witnessed the on-going and powerful forces of Nature. And I saw being played out in front of me, the reminder that no matter how much we humans think we control what is around us, we’re mistaken. We can prepare ourselves, yet the best laid plans often go awry.

As I walked back home, the skies opened and I was drenched before I reached my walkway. With my perspective still in tact, I didn’t fret. I knew that this is what can happen even in a well ordered life. And I knew shelter was close— I’d be dry and warm before too long.

Today dawned sunny and calm, but the aftermath of the storm lingers. Huge waves are pounding the shore. More preparations have been made to limit the possible destructive force. Sandbags are stored on the walkway, ready to use if necessary. That is what we human beings do. We get ready and we do our best.

This entry was posted in About Life in General, Searching for Wisdom and tagged force of nature, good listeners, rainbows, relationships, storms, whales, wisdom, yoga. Bookmark the permalink.

4 responses to “In Yoga Class”