Celebrity Citings and Honoring our Vets

I’ve just had an interesting ten days. It was my husband’s birthday and we celebrated in Hawaii.

Concurrently at our hotel, Jack Osbourne, the son of Ozzy and Harriett, I mean, Sharon, was getting married. I guess it was hush-hush so the Paparazzi were out in force. The beaches are public in Hawaii so these guys were free to lurk a few feet away from the hotel’s private property walkway. If you wanted to sit on the beach while on vacation, you had a guy dressed in safari gear waving a telephoto lense near your head. There were also confrontations between security and the Paparazzi. 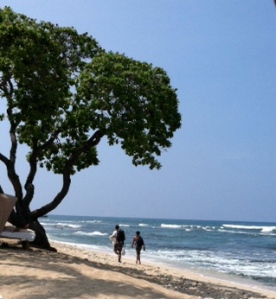 Two Paparazzi On the Prowl

The security guys played a kind of keep away with them, trying to block them from photographing the Osbourne family at the pool. I’m telling you, it was hard to get in touch with your inner-mermaid under these conditions.

I must admit to a morbid curiosity. We’d heard rumors about the wedding and you just couldn’t help looking around. I don’t even care about the Osbournes, but it was fascinating to see them. One day after all the hoopla, I was taking my usual walk and up ahead saw what I thought was an older woman limping along with her grandkids in attendance. As I got closer, I saw it was a man with long hair who was all dressed in black. I should have gotten a clue then—how many people dress all in black at 8:15 in the morning in Hawaii, but I had to hear the man speak before I realized it was Ozzy. The fresh-faced teenager smiling from ear-to-ear at the man’s story? I didn’t realize until later that it was Kelly Osbourne. I’d only seen her with a sneer on her face, and didn’t realize how pretty and sweet she could look.

At the same time, forty Medal of Honor winners were being feted at the hotel. Being a writer, I am observant of what’s going on around me—a nice way of saying I’m nosy—and I had noticed this group of mostly older men and their families. One day they wore Hawaiian shirts of similar design. I had no idea they were Medal of Honor winners until I was in yoga class. Someone had sat in on a meeting when each man told his story of how he’d earned his medal. She was still overwhelmed by their bravery and modesty. “Each story brought tears to my eyes,” she said. I began watching these guys—really looking at them, trying to see in their faces what had made them able to act “above and beyond the call of duty”.

Medal of Honor winners in Hawaii, 2012

As an aside, you can imagine with all my looking, I don’t watch where I’m going. No wonder I stumble a lot!!

Not only do I look but my mind takes me elsewhere. Here, I thought, were men whose pictures should be in the news. TRUE HEROES. Their claim to fame was not behavior on a concert stage or on a reality television show, but lay in their ability to act in dire situations. How had our society’s priorities gotten topsy-turvy? We honor celebrities but we overlook the valiant among us.

It is something to think about.