The Story of My Life

I have been very busy trying to take care of my husband who is recovering from total hip replacement surgery. At first he was on a walker and needed help with just about everything. But he became ambulatory and more self sufficient as each day went by.

My problem in these situations, is that I think I need to be Super Woman and do anything and everything 100 per cent–for the patient, for me, for the world. That’s all well and good until, like a spinning top, I wear down. I’m still going in circles but in a slower, more erratic path. I also depend on coffee cake and pie to see me through.

A week ago, on top of my extra duties, I decided I needed to get back into shape. I attempted to walk 10,000 steps a day. I scheduled an appointment with a trainer. I cut up apples, oranges, carrots, celery and cucumbers for quick snacks versus cookies.

The morning for the workout with the trainer came. Before I went, I wanted to make sure my husband had a good breakfast. Full disclosure: I don’t normally make breakfast. It’s a do-it-yourself meal . . . along with lunch. But, during his recovery, I was doing three meals a day. (He’s very happy this week that he can make it to the fridge on his own so he can get back to grazing.)

All was going well. I’d gotten up early so I could help my husband with his shower, etc. And with getting the dreaded compression stocking on. That, in itself is a workout! I was dressed in my work-out clothes and in the kitchen, getting eggs out of the fridge, by 8:30. Then I stopped breakfast preparations to take the dog for his walk. Outside I noticed a lot of weeds in the front yard, which I felt needed pulling right then and there. By the time I’d fed the dog, it was 9:15 and I knew I had to hurry up.

I cracked the eggs into a favorite bowl and beat them with a fork. I turned to check that the pan was ready, and that’s when it happened. Somehow, the bowl tipped and most of the eggs landed on the floor, dripping their way down the cabinets.

I just stood there for a moment, looking at the oozing mess. When I was younger, I think I would have cried. As a senior citizen, I weighed my options. Might as well take a picture of this mess, I thought. It could be the basis for a blog.

After doing an initial cleaning that at least got the surface mess up, I opened the egg carton to find only one egg. Oh well, I thought, so I don’t eat breakfast. No big deal.

I beat the last egg into the remaining egg mixture, checking the time. It was now 10:00. My workout was at 10:30. As I poured the eggs into the pan, I could hear my husband clumping towards the kitchen.

Okay, back on track, I thought. I turned away from the stove to check on the rolls warming in the oven. When I came back, I noticed the eggs had cooked nicely in the pan. It looks almost like an omelet, I thought and decided to give the eggs a flip. The result was the best looking omelet I’ve ever made.

And yes, ladies and gentleman, that is the story of my life. Sometimes from the pits of a disaster, I’ve rescued the situation to create a success. I never give up. I just keep on keeping on. Why not?

Posted in About Life in General, Babybooming, Searching for Wisdom, slice of life

Tagged best omelet ever, making lemonade out of lemons, making the best of it, never give up, spilled eggs, The Little Engine That Could

Grand Theft Auto: Not the Game

My car was stolen about a month ago. My husband had driven it down to Palm Springs to get it serviced where we bought it…and to play a little golf and visit with one of his best buddies. He stayed at a hotel in Indian Wells and when he got up in the morning, the car was gone from the lot. Security cameras showed a man trying the door of several cars and finding mine open, getting in and driving away.

Later that day, none the wiser, I called my husband to see how his day was going.

“Everyone okay?” I asked.

“Oh, yeah, everyone’s fine,” he said. I could hear his friend laughing in the background and I smiled.

“The bad news is your car got stolen.”

“Really?” I said, barely reacting. For some reason it didn’t faze me.

But it wasn’t. Ten days later, the police saw the car parked along a street in Palm Springs and went to investigate. The driver jumped out of the car and sprinted down the street. The police gave chase and caught him.

When they called to notify us, they said the car was a mess but mostly intact. By then, I was looking at other cars—I wanted a small sedan and was narrowing my choice. (I must admit to being a little disappointed that the car hadn’t gone to a chop shop.)

One of the officers asked my husband if he used drugs.

“It’s just a formality, sir,” the man said. “We found a considerable amount of drug paraphernalia in the car.”

“Well, if you consider aspirin and ice creams to be drugs, then I do,” Moe said, laughing.

The car was taken to an impound lot and then towed to the dealership because the key was gone, (which is somewhat of a mystery. How was the guy driving the car if he had no key?) Several other parts of the car were gone, as well as all our personal belongings. For my husband, it was devastating. His new golf clubs were MIA.

Yesterday was the first time I’d seen my car since it was stolen. And the reality set in. On the surface, the car looked great. It had been detailed so it looked new. But for me, my car is like a second home. The center glove box contained a small pharmacy of dental products, acid reducers, eye drops, hand creams, etc. I had two of my best pairs of sunglasses in the regular glove compartment, with some cash hidden behind them. (You never know when you might get stranded without your wallet.)

I began to feel as if I’d been burglarized—violated—in some way, as if a stranger had pawed through my underwear.

I opened the trunk to see if the thief had truly taken all the bags I’ve collected in my travels that I use for the grocery store. Gone. The earthquake emergency kit was taken—even the license plate was stolen and the 20-year- old remote for the garage that barely worked. The bag with jackets and hats and gloves, flip-flops and umbrella—all the miscellanea I might need someday—was gone. And the golf towel that had been my dad’s, which no one knew I’d kept to remind me of him.

What was really disconcerting was that the thief had left a bundle of clothes, and his own miscellanea behind, including small sized clothing and Little Mermaid stickers. 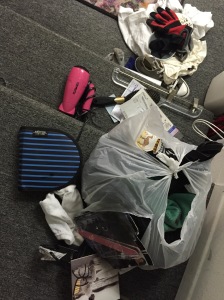 There’s a t-shirt that must have been his—I can tell how big he is. 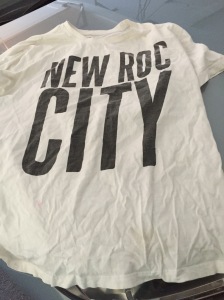 I began to wonder if he and his family had been living in the car? Using it as a drug den? I was totally creeped out.

Today is better. I still don’t feel like it’s my car, but I’m sure that will come with time. Meanwhile, the trunk of my car is clutter free!

p.s. Moe says I should write the thief a thank you note. Because of him I got around to installing the garage door  remote feature in my car.

Posted in About Life in General, Searching for Wisdom