Race in America: The Courage of Rabbi Teitelbaum

The Ava DuVernay film, Selma, is such an excellent film with such fine acting that I felt transported back to the 1960’s while I watched it. The film centers around the Selma to Montgomery March for voting rights in 1965. Although this was an African American movement, many Jewish people were involved in the civil rights struggle. Not only were the horrors of the Holocaust still fresh, but most of us had grandparents and parents who had fled bigotry and oppression. We wanted to help end the same type of hateful acts in America, the Free.

I remember admiring the people who went to the South to march, putting their very lives at risk. My parents would never have let me go and I doubt that I had the courage to do it anyway. But, I do know someone who did have the courage to stand behind Dr. King and other leaders in the March: Rabbi David Teitelbaum. He is the brother and uncle of friends of mine.

Recently President Obama spoke about him in his remarks at the Adas Israel synagogue, on May 22:

“…I want to close with the story of one more of the many rabbis who came to Selma 50 years ago. A few days after David Teitelbaum arrived to join the protests, he and a colleague were thrown in jail. 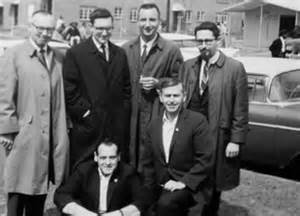 And they spent a Friday night in custody, singing Adon Olam to the tune of “We Shall Overcome.” And that in and of itself is a profound statement of faith and hope. But what’s wonderful is, is that out of respect many of their fellow protestors began wearing what they called “freedom caps”– yarmulkes — as they marched. 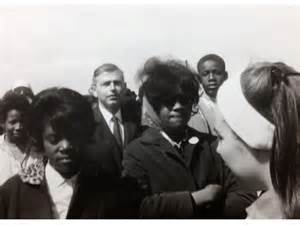 And the day after they were released from prison, Rabbi Teitelbaum watched Dr. King lead a prayer meeting before crossing the Edmund Pettus Bridge.”

As we remember the struggles of years past, I hope we can remember the benefits of standing strong together for what is right and just. As we acknowledge the ills of today, I hope we also can stand together, a rainbow of colors and creeds, working to create a better America for all. For me, these aren’t just words—they are my intention.

Just as I finished writing this, I got this news update from the New York Times:

“Seven years ago, in the gauzy afterglow of a stirring election night in Chicago, commentators dared ask whether the United States had finally begun to heal its divisions over race and atone for the original sin of slavery by electing its first black president. It has not. Not even close.

A new New York Times/CBS News poll reveals that nearly six in 10 Americans, including heavy majorities of both whites and blacks, think race relations are generally bad and that nearly four in 10 think the situation is getting worse. By comparison, two-thirds of Americans surveyed shortly after President Obama took office said they believed that race relations were generally good.”

This survey does not change my intention—it only makes it stronger. The bandaids are off so we can see the poison underneath. Let’s dig deep and make some real change.

Posted in About Life in General, United States

Some people have questioned my political leanings. Why, they ask, are you so liberal?

Actually, I don’t think of myself as a liberal. Certainly, I can see eye-to-eye with fiscal conservatives. But I was raised to believe that all people are created equal. I’m not talking specifics here—Little Johnny may have more brains than Little Spencer. Little Clarissa may have been born to a wealthy family and have advantages over Little Joanie. No, what I am looking at is the forest here—or the species, really. What I am saying is that though our skin color may be different or our religion or our ethnicity or sexual orientation—underneath it all, we are human beings. We are the same. 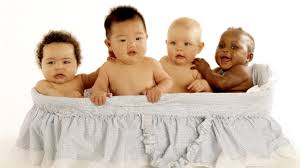 It’s been fifty years since Martin Luther King Jr.’s “I have a dream” speech. My classmates and I were privileged to hear him speak before then. In November, 1961, at the invitation of our principal, Frank Hanawalt, Martin Luther King Jr. came to Garfield High School to speak. He also spoke at my temple, Temple De Hirsch Sinai. Many of my contemporaries heard him there. He spoke of brotherhood and kinship and equality for all. He made us realize we could do something to create change.

From that time on, I had a dream that all children would be treated equally no matter their race, religion, or ethnicity. It was so apparent to me that people are people—some are good and some are bad. Some are smart and some are stupid. But I could also see that the economic and social divide of America was of Grand Canyon proportions. If you came from a disadvantaged background, it could make all the difference to getting ahead. I felt education was a key to getting people out of the ghetto.

I began teaching at Meany Junior High in 1967. I wanted to work within the system rather than outside of it. (I ‘d become a civil rights activist in my own way since college. Once, George Lincoln Rockwell, the Nazi bigot, came to speak at the University of Washington. Many of us were outraged. When they wouldn’t cancel the speech, we attended, sitting Caucasian, African American, Caucasian, African American throughout the auditorium.)

At Meany, located in Seattle’s inner city, I became a civil rights advocate in my classroom. Someday, I thought, if these kids were encouraged and given the chance to learn, they could go anywhere—why they could even become president!

The President of the United States.

When I quit teaching to raise my family, I brought the ideal of equality into our household. For starters, I put a poster of a white baby sitting next to a black baby, by my children’s crib. I am proud to say that my children and their children do not disappoint me. In reality, babies are color blind. You have to be taught to fear and hate. My daughter just sent me this photo. Our granddaughter, who is 18 months, had settled two of her dolls together for the night. 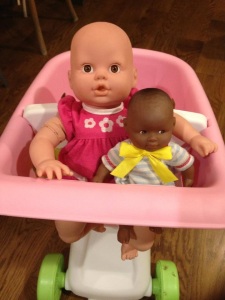 I think it is inconceivable to my children and grandchildren. that African Americans had to sit in different parts of a bus or drink at different fountains. It was to me, too. I remember going to a high school convention that was held in Houston. When I mentioned that my school was integrated, other delegates couldn’t believe me.

“So, they go to your school, but they have different classrooms,” one girl said.

“Really? Well, they sit on the other side of the room, then,” another girl said.

I shook my head. “Nope, we all sit together.”

I wish I’d known then that Jimi Hendrix was going to be famous because I could have bragged that he sat next to me in Sophomore English.

Posted in About Life in General, Searching for Wisdom