When I opened my computer today I saw the following headline: 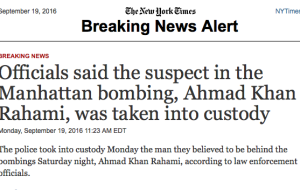 “Oh, boy,” I said aloud. “The Muslim community must be going crazy.”

I hadn’t read the article yet. Didn’t know that Ahmad Khan Rahami had been radicalized. Didn’t know he was 28 and that his family lived in New Jersey. I just saw the name and guessed he was Muslim.

It reminded me of when I first read about Madoff. “That’s not a Jewish name, is it?” I asked my husband.

I was hoping that uber-scoundrel was not Jewish—not of my tribe. I knew that if one of us does something wrong, the rest of us gets painted by the same guilty brush. Even if we are completely innocent.

I was afraid of a backlash and that was before the recent resurgence of anti Semitism that is plaguing our country and our world.

I can only imagine what the law abiding Muslims across America are thinking right now. Gone was their hope that their names wouldn’t be linked with the identity of this terrorist. But the truth is that Ahmad Khan Rahami did this. Not a whole group.

When I opened the article I learned that Ahmad Khan Rahami shot the first officer who approached him in the stomach. He injured another. His intent was to injure and kill as many innocent citizens of New Jersey and New York as he could. He was going after civilians enjoying the last days of summer, just as all of us are in our own hometowns. The bombs were loaded to inflict huge damage to flesh and bone. No wonder he is called a terrorist. His actions are terrifying.

So what do we do? What is our course of action? Do we stay indoors and hide? Do we say that all Muslims are terrifying? Do we give into the terrorists’ acts?
I say no. Let’s stay on a steady course. Let’s not be afraid to live our lives. Let’s not forget the acts of bravery by the police and fire departments. Let’s use reason and rational judgment before we act. Let’s be intelligent about how we analyze what has happened and how we should react. Let’s be guided by wisdom and actual facts.

Posted in About Life in General, United States, World Situation