Believe it or not: I Found a Hair Volumizing Product that works!

This is a message for those of you who are folliclly-challenged. The rest of you who have full, thick heads of hair probably won’t be interested, including my sister who was handed out all the hair anyone could ever want at birth. She still has lots of hair she can have fun with.

I, myself, would do almost anything to have thicker hair…and I probably have. I can resist other types of products but if anything has “MORE VOLUME” written on it, I buy it. I have more products under my sink than Johnny Appleseed had seeds. 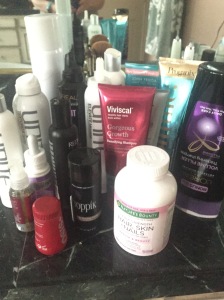 Some of these things above have been helpful but I want to announce that I have found a new hair produce that actually seems to work: Toppik Hair Fattener.

It is giving my limp, lifeless strands more body! Just a little before I blow dry and my hair is so much thicker. How it works, I don’t know. I’m just seeing with my own eyes that it does.

I am obsessed by hair. When I’m in a crowd, after I’ve checked that no one is carrying a suspicious package, I’m checking out everyone’s hair. I can honestly say it’s the first and last thing I notice about a person. “Why can’t I have a swinging ponytail?” I mutter under my breath as I watch a woman walk by. “Why can’t I have a thick bob?” I whine to myself. You can’t really let people know how you feel about this, especially when there are children starving and good friends are losing all their hair to chemo. But, I know I can confide in you.

My story of hair deprivation begins early and with a mother who had scads of hair. You can see that she’s already wondering if the bow will cover the bald spot. I’m already questioning the fairness of the Universe: why I didn’t get the thick hair genetics?

By nursery school, my hair wasn’t lush like my friend, Chi Chi’s in the foreground, but it wasn’t bad except for the bangs. I’d suffered a burn to my forehead so the bangs had to be short. 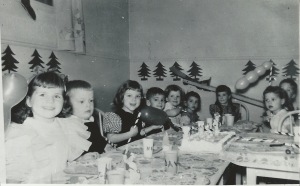 Grade school I don’t know how my hair looked because I didn’t care. By the end of high school I got interested, but the results were mixed.

In the Sixties, big hair was in. Everyone teased and sprayed and wore these little dome wiglets on top of our own hair.

I wore one at my wedding:

That began my life long love of wigs and falls. Here my granddaughter is modeling one.

An extension of the wig is extensions, which I adored when I wore them. Unfortunately, they are hard on the hair, creating more hair loss.

My amount of good hair days compared to bad is miniscule. My hair is not only thin, it’s baby soft. Also it has just enough curl to cause problems, better known as frizz. My hair won’t stay down or straight. ( My oldest granddaughter and I were measuring the other day to see how tall she is now. My son said if you discounted my Afro, she’s as tall as I am.) My hair is unable to withstand humidity or a windy day. If anybody touches it, they run the risk of great personal injury. I almost divorced my husband once when he insisted on driving his father’s classic 280SL with the top down to a party. Has he no sensitivity?

In order to counter effect my reality, I wear a lot of hats. And once I wear a hat, I can never take it off until I get home. If anyone playfully tried to take it off, they’d probably lose a hand. 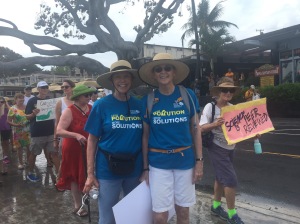 I grade photos of me on how good my hair looks. Here’s a couple of examples:

You might think I like this photo because my little grandsons who are now 18 and 19 look so adorable. No, it’s because my hair looks great!

I do like the following one because I had a great lunch with Judy Blume, but also my extensions looked fabulous:

You might think I like the next one because it records a very special time, but get a load of my hair! It looks amazing! It lasted through the B’nai Mitzvah ceremonies and then it was toast for the next ten days.

You might think I like this one because I’m surrounded by my family. I do, but the hair is the main thing–it looks thick! 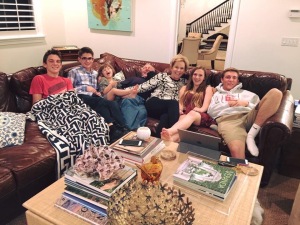 Besides just having lousy hair, I have a long and sad history with hair loss. Each time I had a kid, my hairline receded a bit. I had a widow’s peak before them. 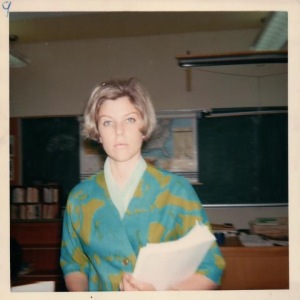 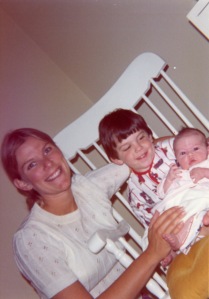 Widow’s peak was gone after. (I wanted to have three kids, but I guess it was prudent that we stopped at two.)

When I had malaria, my hair fell out in handfuls. And then grew back sparsely. That’s when I joined the American Hair Loss Association.

My dermatologist saved my sanity when she suggested Kenalog injections. She felt that the malaria had sent some of my follicles into a dormant state and they could be “reawakened.” Yes the injections hurt but they worked!!! And yes, I’d do it again in a second. 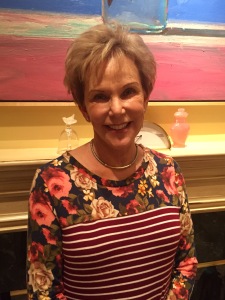 This is the photo I had my daughter take of me a couple of weeks ago, trying to show I was getting better from the virus. Actually, we had to do it that night because I’d had my hair done earlier in the day and it looked good. No matter that I needed my bed, I wasn’t going to waste any opportunity.

So now you know more about me, probably more than I’d reveal on an every day basis.  Probably TMI, actually. But if you’re interested in any other products I’ve found useful, just ask. Oh, and for those of you who have oodles of hair 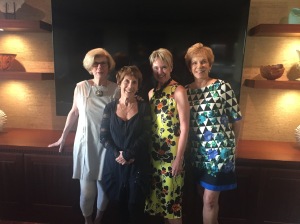 and tell me how difficult it is to take care of, (you know who you are) be nice to me and others like me. You never know when we’re carrying scissors. 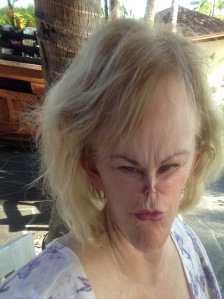 2 responses to “Believe it or not: I Found a Hair Volumizing Product that works!”