So many White people are upset with the Black Lives Matter movement. “All lives matter,” a friend said to me the other day at coffee. “Why are those people so divisive?”

At yoga, the instructor asked, “Why did they interrupt Bernie Sanders and Jeb Bush? It’s so rude.”

It was hard to quiet my mind after her question. During the class, my brain worked over time figuring out what was happening and where I stood. I must admit I’m a Rodney King kind of person–my knee jerk question is always “Why can’t we all just get along?” And I was raised to always be polite, always.

But there comes a time when you don’t have the leisure for good manners. The leaders of the Black Lives Matter Movement feel that is now. They don’t want another Sandra Bland to die because of police brutality. Or a Michael Brown or Freddie Gray.

Yes, all lives matter, but historically in America, Black lives haven’t. Black Lives Matter is a movement that wants to shake up the status quo NOW so more Blacks don’t die. It’s specific because it needs to be.

The grass roots movement was co-founded by three black activists: Alicia Garza, Patrisse Cullors, and Opal Tometi after the July 2013 acquittal of George Zimmerman in the shooting of Trayvon Martin. After the 2014 deaths of Michael Brown and Eric Garner, the Black Lives Matter movement gained momentum. In both cases, grand juries didn’t indict the officer and no charges were brought. The conclusion to not only the Black community: Black lives don’t seem to matter and the justice system is skewed. Two tools, which are making this obvious to everyone, are cell phone videos and social media. You can’t argue with what has been recorded and social media is spreading the word.

Black Lives Matter seems to be focused right now on getting Presidential candidates to develop policies that will ensure racial justice. An excellent goal, but are they going about it the right way?

In August, in my hometown of Seattle, Bernie Sanders’ speech was disrupted by a group who walked onstage, grabbed the microphone from him and shouted at the audience that they were racists and White Supremacists. Sanders looked bewildered, but the next day issued a racial justice policy.

Clinton defines the practical, but I believe changing hearts should not be overlooked. Shouting, “All whites are racist!” may feel good in the moment. Disrupting political meetings may make demonstrators feel powerful when they’ve only felt powerless before—but is this how to create lasting change? It’s got shock value, but is it detrimental to the end goal of not only saving black lives, but making black lives worth living? Or does it allow Fox News to target it as a Murder Movement, suggesting it promotes cop killings?

In a television interview I watched, Alicia Garza, Patrisse Cullors and Opal Tometi discuss their goals. Articulate and well spoken, I was convinced by their arguments. I now wear a pin that shows I support the Black Lives Matter Movement. 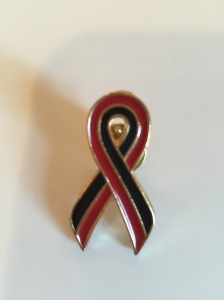 This is more of what we need. Don’t make me defensive by calling me a white supremacist—I am not a George Lincoln Rockwell. It’s the events that have knocked off my rose colored glasses, not the violent protests. Now continue to show me, educate me, open my eyes. Then use me and my resources, white though they may be, to help bring about necessary change.