I was too tired to watch the eclipse the other night. Besides, would I really be able to see anything? I wondered. So I got ready for bed. Teeth brushed, face washed and creamed up, I was about to slip into bed, when I thought: What the heck? Might as well check on what’s going on.

Outside, the grass looked as if it were lit by floodlights. The luminescent moon cast its brightness in a wide arc. Was that a dark spot in the left bottom quadrant? Was the eclipse actually starting or was it only clouds? Could I be that lucky to get such a clear view? I went back inside, not convinced that anything was afoot.

“The eclipse might be starting,” I told my husband.

“Great,” he said with no enthusiasm. He pressed something on his Kindle and kept reading.

I was no longer tired so I picked up my book and began to read, as well. Fifteen minutes later, I went out to check on the moon or rather the eclipse of it. Oh my goodness—things were percolating!

I went back inside to get my camera. We moonies take a lot of moon photos on a regular night—I couldn’t let this event go by without trying to take a few shots. My little Canon tried its hardest to photograph the progress. I tried my hardest to crane my neck and focus on the moon so I could click at the right time. ( The shakiness of the aging hands didn’t help matters.) I was happy to a get a few good shots before my also aging neck seized up.

“You gotta come out and see what’s going on,” I told my husband when I came back in.

He rolled his eyes but followed me back outside. It was a half moon by then. “Impressive,” he said and returned to his book.

I rolled my eyes at his back and stayed outside, wishing I had a telescope. When I told myself to be grateful for what I did have, I remembered the binoculars. I really had to crane my neck to use them, but it was worth the neck strain. What a sight. 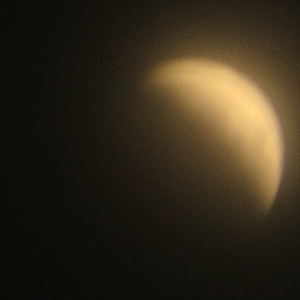 I went inside and onto the computer to get some info and give my neck a break.

Here is what I learned from Timeanddate.com: The Moon does not have its own light. It shines because its surface reflects the Sun’s rays. A lunar eclipse occurs when the Earth comes between the Sun and the Moon and blocks the Sun’s rays from directly reaching the Moon. Lunar eclipses only happen at full Moon. The Earth’s atmosphere removes or blocks parts of the sunlight’s spectrum leaving only the longer wavelengths. Because of this, a totally eclipsed Moon usually looks red.And I found that was exactly what was happening outside. The darkened part of the moon was becoming red before my eyes.

I stood there watching, trying to picture that I was on the planet that was moving between the sun and the moon. It was beyond my ken. My imagination went only so far as to see a stick figure, hanging on for dear life to the big blue marble that orbits in space. The gravity of it astounded my feeble brain.

With the eclipse in full throttle, it was now dark and I had to watch my step. The star filled sky glittered in the blackness created by the eclipse. There I was standing on solid earth while hurtling through space.

For a second, I felt the infinity of the universe envelop me. A grain of sand, I was part of the whole.

This entry was posted in About Life in General and tagged Earth, eclipse, gaining wisdom, marvel, Moon and Stars, taking time to see the world, universe. Bookmark the permalink.