Endings Can be Tricky

Everyone always emphasizes how important the beginning of a story is—you need to catch the editor’s eye and the reader’s interest. This is true, but endings are vital to the integrity of a story.

This becomes apparent when the ending just doesn’t satisfy. Some endings seem rushed as if the writer had a deadline and just threw together something that would be okay. Other endings may feel too wide open—that the author copped out of creating a conclusion. Or others just don’t seem to fit—you feel the author should have left well enough alone and ended it before.

This last is true of the novel, The Light Between Oceans. The book, excellent by the way, has a lyrical, other-world feel. I felt it should have ended at chapter 36, but author M.L. Stedman writes a wrap-up chapter that is unnecessary. Worse, it takes away from the whole narrative.

Which way to go?

DO know that endings are super important. When I wrote for newspapers and magazines, I knew my last paragraphs could be cut if there wasn’t enough space. Accordingly, my last paragraphs were written to be expendable. Fiction or Essay are a different story. There is a significant build up from Beginning and Middle to End. While I was never upset when the editor cut an article, I would have been if she took the end off of one of my humor pieces. Often, the end was the whole point. The only time I have had the last paragraph deleted from a short story was when my “Her Father’s Daughter” was published. That time I was upset because the story turned on the last line.

DON’T listen to advice about the end of your work unless it makes sense to you. When I finished The Light Between Oceans, I had this feeling that Stedman’s critique group told her she should explain more of what happened. So she wrote a final chapter, but it didn’t grow out of the narrative thread. Sometimes when I finish a story and my husband reads it, he’ll say, “But this isn’t done. What happens?” I do favor open endings, but sometimes I’ll add more for him. This worked well in the “Anniversary Waltz” short story, perhaps because the main character is a lot like my husband. 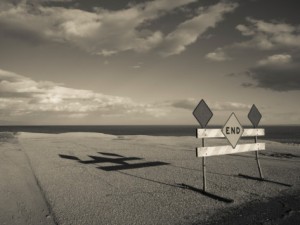 Writing Aerobic: At the end of …