Lesson 43 of Writing Do’s and Don’ts

Remember, the key to a great story is a character who wants something and has impediments along the way. This combines plot with character development.

We’ve said this is a rule than can be broken, but don’t tell too much. Let the reader discover what the truth is. Use a combination to make your story work.

TELLING: When I was ten, my mother had a nervous breakdown. She didn’t come out of her bedroom for three months. She became overwrought by the slightest thing.  It was a difficult time.

SHOWING AND TELLING: When I was ten, my mother had a nervous breakdown. She didn’t come out of her bedroom for three months.

“Come in,” she said one day, seeing me lingering at her doorway.

“How are you today, Mother?” My tone was hesitant as I walked into the room.

She mumbled something so I walked closer and sat on the edge of her bed.

“What are you doing?” she screamed.

“What are you doing?” It was more of a shriek this time. It brought my dad running.

“What’s the matter? What happened?” he asked.

“She sat on my bed.” My mother pointed an accusatory finger at me.

By then I was cowering by the Chinese lacquered chest of drawers.

“Go downstairs, honey,” my father said to me. He looked so distressed I began to shake.

DO: Tell to get important information in the story without stopping the narrative line.

DON’T: Tell too much. Stop and show what is happening. Let the reader be there, on the scene. 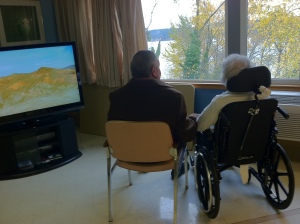 Show what is happening between the son and his mother.

ASSIGNMENT : CHOOSE ONE OF THE FOLLOWING SCENARIOS AND WRITE A STORY.

Peter needs a kidney transplant. He’s 10 on the list, but his kidneys are failing fast.

Maddie needs to get a college scholarship. She’s the child of a single mother. Her interview is in a week, but she doesn’t know how she can get there.

Sheila needs to get her husband to the emergency room. They’d been at the mall when he started  feeling ill. They are in the car and he’s passed out.